WAS MEGATRENDS AUTHOR JOHN NAISBITT CORRECT ON HIS FUTURE PREDICTIONS? 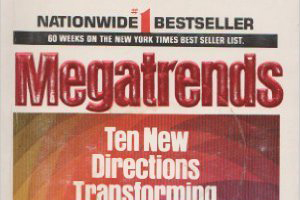 To craft his epic book, he used the research technique known as “content analysis,” employed by the American intelligence services during World War II. Naisbitt and his team read thousands of newspaper articles (the Internet then) in the late 1970s and early 1980s to see what ideas and issues were being discussed. By 1982, he came up with the final list of ten massively influential ideas that he called “megatrends.”

What did he say and what was he right about when we consider current business and marketing related issues?

1. He said: “We have shifted from an industrial society to one based on the creation and distribution of information.” Naisbitt hit the nail on the head here. As his most important and most accurate prediction, some say now that it was a forgone conclusion. But it wasn’t. Again, the Internet was nowhere close to being made a reality in 1982. We were using Apple II and Commodore 64 computers at the time! The fact that Apple is now worth more than Ford, US Steel and General Electric clearly illustrates high tech’s achievement.

2. He said: “We are moving from being a self-sufficient national economy to being part of a global economy.” Absolutely dead on correct. We now buy American-designed cars with electronics from Asia and steel and plastic parts made in Latin America, with the final assembly plants in Canada. Money and jobs flow freely across national borders.

3. He said: “The new information technology will revitalize participatory democracy.” This is definitely true because the last three national U.S. elections have seen record amounts of votes cast. The Internet has greatly enhanced democracy and will continue to do so around the globe. Lets just hope we can come up with ideas and solutions that will bring resolution and compromise to the extreme political polarization we see currently.

4. He said: “Society will shift from hierarchical structures to informal networks.” Bingo! The decline of the old mass-production industries like auto and steel, followed by the rise of small high-tech companies (Apple, Microsoft, Dell and more) that ballooned into nimble, highly adaptable enterprises shows us how this mega trend has played out and become real. Another proof point: The classified sections of major newspapers have been replaced by something way better, easier and cheaper: Craigslist. Big marketing impact, right?

5. He said: “Society is changing from a narrow “either/or” perspective with a limited range of personal choices to one of “free-wheeling” multiple options.” Correct again. See the shift from three television networks in the 1970s to 500-plus channels today on a typical cable package. The development of specialty foods and restaurants, cars, clothes, music and family structures all prove that this prediction was right on the money. Huge ramifications for marketing, correct?

Naisbitt was clearly correct on the growth of high-tech industries, globalization, the information explosion enhancing democracy, the boom in social networking and the massive increases in consumer choices. Its great learning for anyone involved in marketing, as it begins to open the eyes to the possibilities and potential of current trends. As innovation is becoming central to both the organization as a whole as well as the marketing practice, its critical to adopt the “visionary mindset”.

I discuss the book, MegaTrends, in my new book Future Marketing, along with many other predictions from current futurists. If you ask me, its pretty interesting stuff.

So, Im curious…What do you think about all of this? I’d love to hear your feedback.